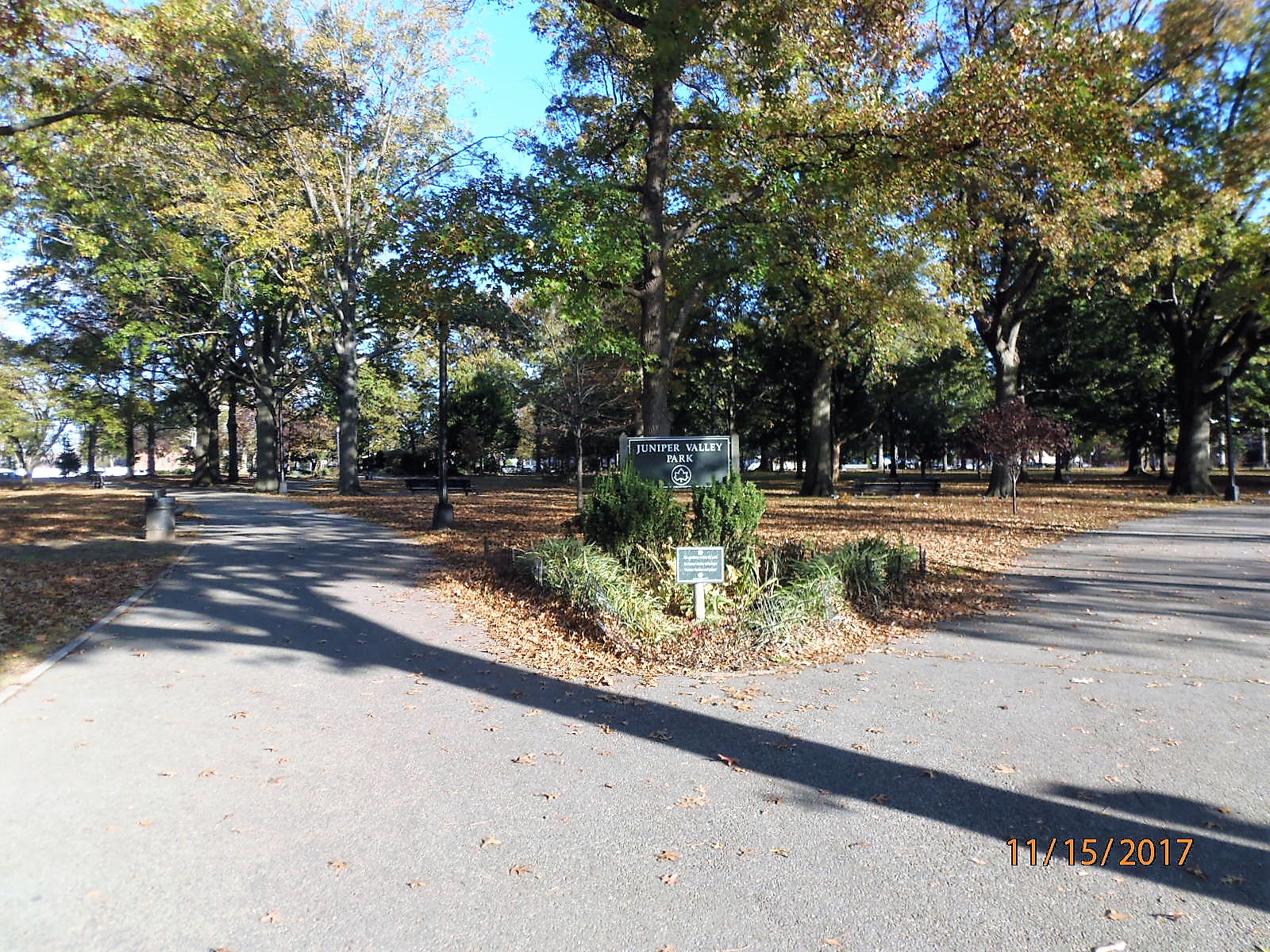 Middle Village is a mainly residential neighborhood in the central section of the borough of Queens, New York City, bounded to the north by the Long Island Expressway, to the east by Woodhaven Boulevard, to the south by Cooper Avenue, and to the west by Mount Olivet Cemetery. A small trapezoid-shaped area bounded by Mt. Olivet Crescent to the east, Fresh Pond Road to the west, Eliot Avenue to the north, and Metropolitan Avenue to the south, is often counted as part of Middle Village but is sometimes considered part of nearby Ridgewood.

Middle Village is bordered by the neighborhoods of Elmhurst to the north, Maspeth and Ridgewood to the west, Glendale to the south, and Rego Park to the east. In 2003, South Elmhurst, an area between Eliot Avenue and the Long Island Expressway, was reassigned from Elmhurst’s ZIP code of 11373 to Middle Village’s ZIP code of 11379. The neighborhood is part of Queens Community District 5, served by Queens Community Board 5. Housing in the neighborhood is largely single-family homes with many attached homes, and small apartment buildings. 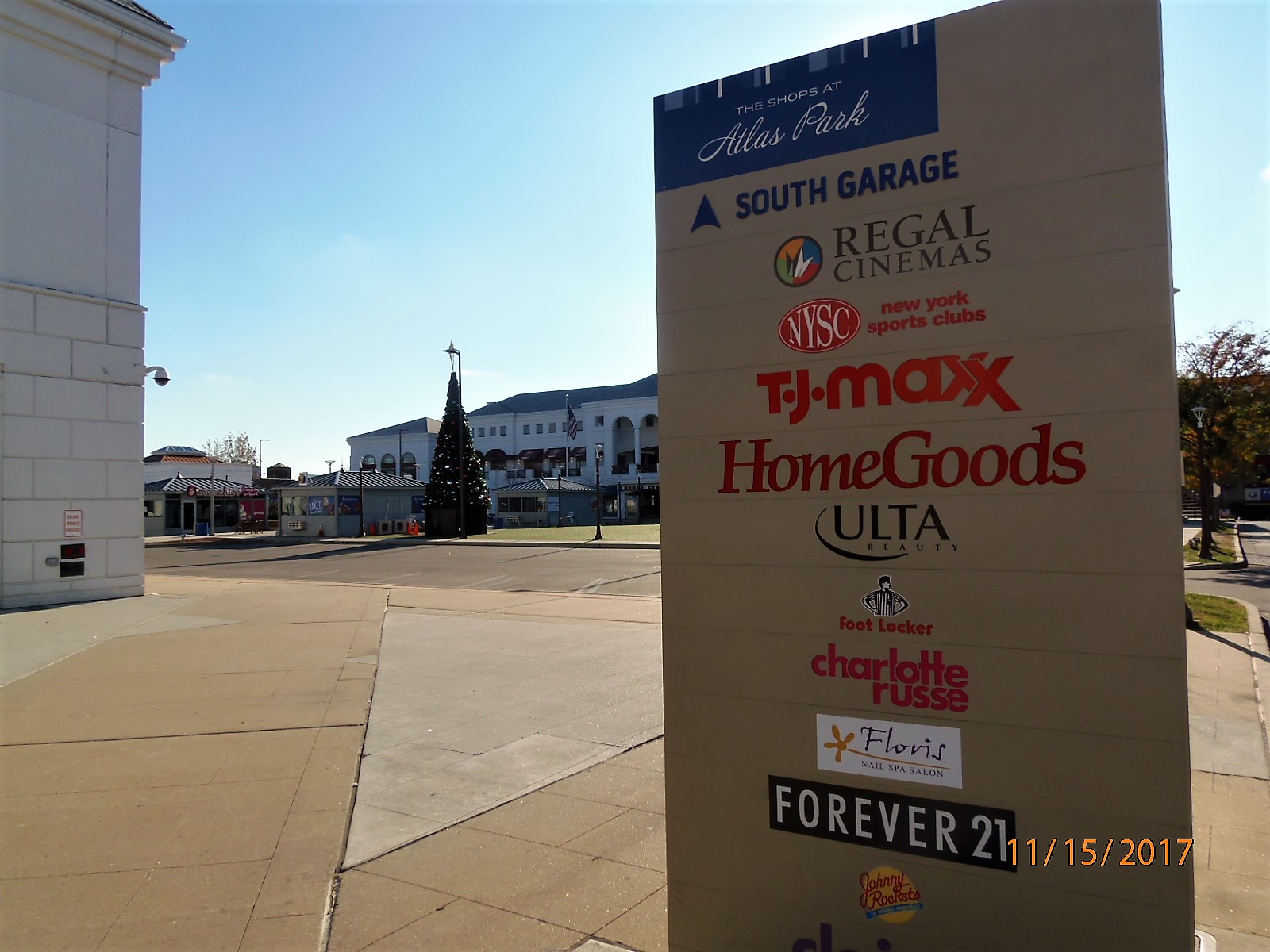 The area was settled around 1816 by people of English descent and was named in the early nineteenth century for its location as the midpoint between the then-towns of Williamsburg, Brooklyn, and Jamaica, Queens, on the Williamsburgh and Jamaica Turnpike (now Metropolitan Avenue), which opened in 1816.It was generally sparsely populated because the large Juniper Swamp was in the area. The swamp, an area where the Americans hid from British in the American Revolutionary War, was originally circumscribed by a “Juniper Round Swamp Road”. In 1852, a Manhattan Lutheran church purchased the farmland on the western end of the hamlet.

After the Civil War, the area became predominantly German. The Williamsburgh and Jamaica Turnpike became an un-tolled road by 1873, and St. John Roman Catholic Cemetery was laid out on the eastern side of the town in 1879. Hotels and other services appeared to meet the needs of cemetery visitors. The western part of Middle Village was called “Metropolitan” until prior to World War I.

The Juniper Swamp was filled in 1915. In 1920, the area was renamed “Juniper Valley” as part of a revitalization project. Shortly after, gangster Arnold Rothstein bought 88 acres (36 ha) of the land, erected facades of houses on that land, and tried to sell these houses, but not before he tried to sell the land to the city as an airport.

A housing boom that began in the 1920s eventually consumed the surrounding farmland and became continuous with neighboring towns and neighborhoods. Originally, homes were built by two major builders—the Nansen Building Corporation, and Baier & Bauer. Charles Baier’s first project in the area was the Parkville Homes in 1927, a group of 30 homes at Juniper Valley Road and 77th Place. With Ridgewood developer August Bauer, they built 150 single-family row houses by 1928. In 1931, Bauer, collaborating with builder Paul Stier, built some 7-room houses at 78th Street and Furmanville Avenue. 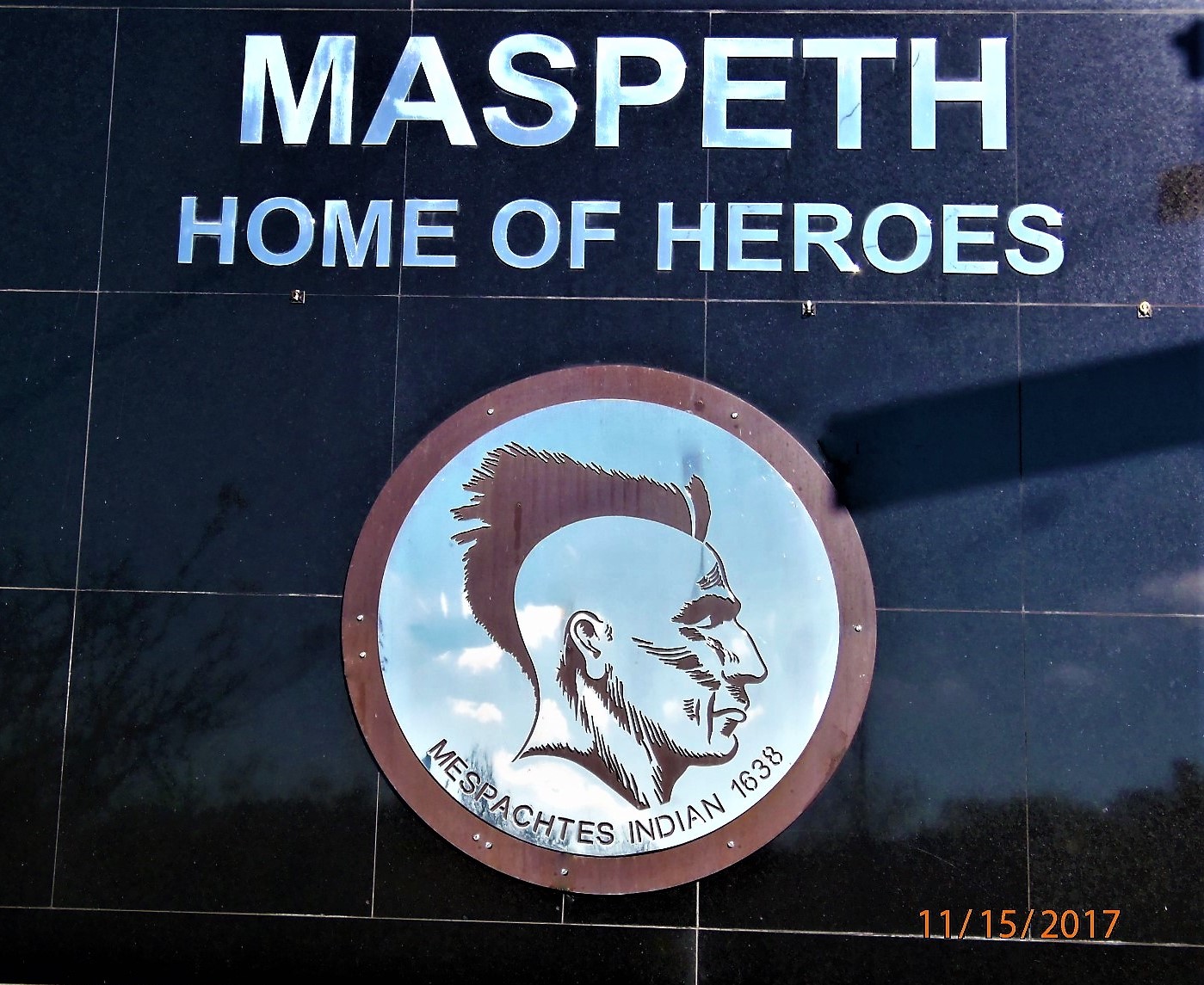 Maspeth is a residential and commercial community in the borough of Queens in New York City. It was founded in the early 17th century by Dutch and English settlers. Neighborhoods sharing borders with Maspeth are Woodside to the north; Sunnyside to the northwest; Greenpoint, Brooklyn to the west; East Williamsburg, Brooklyn to the southwest; Fresh Pond and Ridgewoodto the south; and Middle Village and Elmhurst to the east.

The name “Maspeth” is derived from the name of Mespeatches Indians, one of the 13 main Indian tribes that inhabited Long Island. It is translated to mean “at the bad waterplace” relating to the many stagnant swamps that existed in the area.

The area known today as Maspeth was chartered by New Netherlanders and British settlers in the early 17th century. The Dutch had purchased land in the area known today as Queens in 1635, and within a few years began chartering towns. In 1642, they settled Maspat, under a charter granted to Rev. Francis Doughty, making Maspeth the first English settlement in Queens; the deed that was signed between the Native Americans and the settlers was the first one signed on Long Island. As part of the deed’s signature, the “Newtown Patent” granted 13,000 acres (5,300 ha) to settlers. Conflicts with the Maspat tribe forced many settlers to move to what is now Elmhurst in 1643. The settlement was leveled the following year in an attack by Native Indians, and the surviving settlers returned to Manhattan.

In 1652, settlers ventured back to the area, settling an area slightly inland from the previous Maspat location. This new area was called Middleburg, and eventually developed into what is now the town of Elmhurst, bordering Maspeth. Originally, 28 English Quakers had founded the village of Maspeth, which had sizable water and milling industries along Newtown Creek and Maspeth Creek. Two storekeepers, Nathanial Hazard and Francis T. White, sold food and clothes at the Maspeth Town Docks, at what is now 56th Terrace and Rust Street, by the late 18th century. After the American Revolutionary War, villagers repaved roads with crushed oyster shells or wooden planks.

Columbusville was the name formerly applied to a section of Maspeth. It was a development of Edward Dunn that took place on 69th Place (originally known as Firth Avenue) between Grand Avenue and Caldwell Avenue during 1854–55, and was subsequently absorbed into Maspeth. The name fell into disuse in the 1890s.

Following waves of immigration during the 19th century, Maspeth was home to a shanty town of Boyash (Ludar) Gypsies between 1925 and 1939, though this was eventually bulldozed. 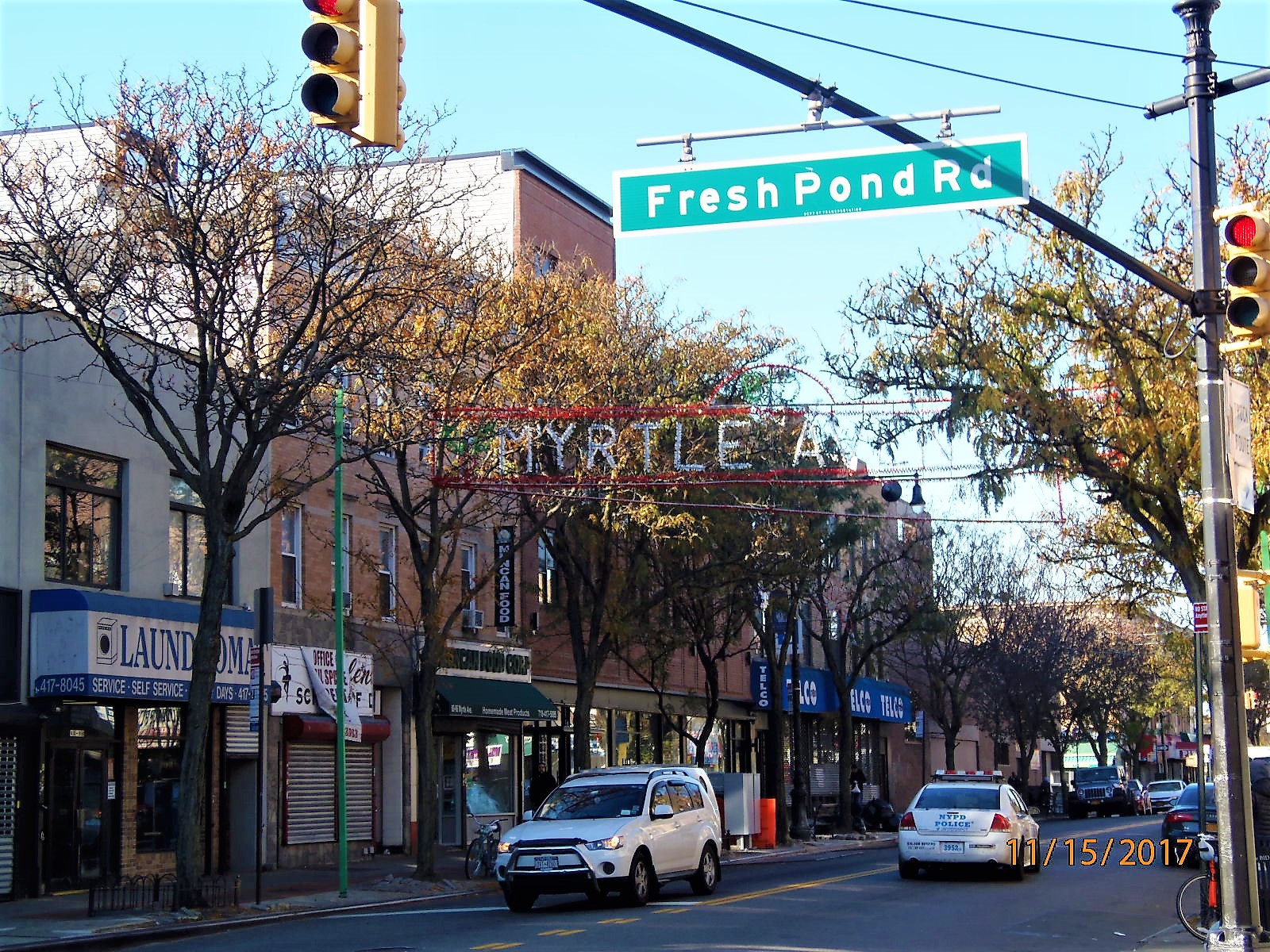 Originally, Ridgewood was part of the Dutch settlement Boswijk (Bushwick) and was later incorporated into the village of Breuckelen (now Brooklyn). A legacy of this past stands today; Onderdonk House, which was erected in 1709. The house is the oldest Dutch Colonial stone house in New York City. Also located at the Onderdonk House site is Arbitration Rock, which was a marker for the disputed boundary between Bushwick and Newtown and essentially Brooklyn and Queens.

Although the area was originally farmed and settled by the Dutch during the 18th and 19th centuries, it was the secondary wave of Englishsettlers who named it Ridgewood after the area’s green and hilly terrain. The development of public transportation, from horse-drawn cars in the mid-19th century and later trolleys and elevated trains, helped to spur residential and retail development. Most of the housing stock was built between 1905 and 1915 to house German immigrants who worked in the breweries and knitting factories that straddled the Queens-Brooklyn border.

After World War I, the population expanded with an influx of Gottscheers—an ethnic German population from Slovenia who were dislocated in the aftermath of World War I—and Irish, followed soon after by Italians. In April 1934, a large, 9,000-person boycott of Nazi Germany resulted in brawls between Nazi sympathizers and Jewish Communist groups.

In the mid-20th century, Romanians, Serbs, and Puerto Ricans arrived. By the late 20th century, Poles, Dominicans, and Ecuadorians—including a significant population of Quechua speaking Amerindians from the Imbabura and Cañar provinces of Ecuador—had moved to Ridgewood. 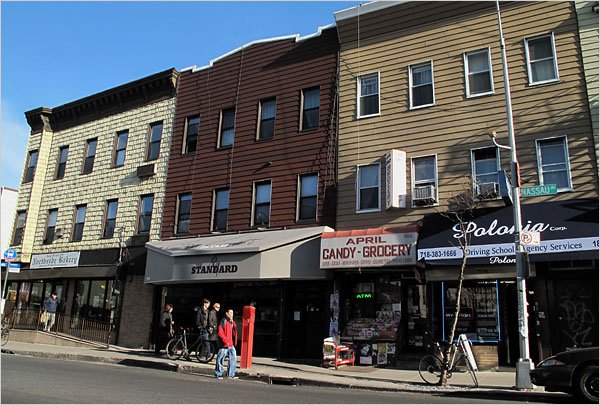 Greenpoint is the northernmost neighborhood in the New York City borough of Brooklyn, in the U.S. state of New York. It is bordered on the southwest by Williamsburg at the Bushwickinlet, on the southeast by the Brooklyn-Queens Expressway and East Williamsburg, on the north by Newtown Creek and Long Island City, Queens at the Pulaski Bridge, and on the west by the East River.

The neighborhood has a large Polish immigrant and Polish-American community, containing many Polish restaurants, markets, and businesses, and it has often been referred to as Little Poland.

Originally farmland – many of the farm owners’ family names, such as Meserole and Calyer, are current street names – the residential core of Greenpoint was built on parcels divided during the 19th century, with rope factories and lumber yards lining the East River to the west, while the northeastern section along the Newtown Creek through East Williamsburg became an industrial maritime area.

Greenpoint has long held a reputation of being a working class and immigrant neighborhood, and it initially attracted families and workers with its abundance of factoryj obs and longshoreman or dock work. Since the early 2000s, a building boom in the neighborhood, especially of multifamily dwellings, has made the neighborhood increasingly a center of nightlife, attracting more bohemian residents. However, there have been efforts to reclaim the rezoned Greenpoint / Williamsburg East River waterfront for recreational use and also to extend a continuous promenade into the Newtown Creek area.

The neighborhood is part of New York’s 12th congressional district, State Senate Districts 18 and 26, State Assembly District 50, City Council District 33, and Brooklyn Community Board 1. The neighborhood is served by the NYPD’s 94th Precinct and the FDNY Engine 238 and Hook & Ladder 106.

Thank you for contacting us, we'll get back to you shortly.

Sorry, we are unable to send your message at the moment. Please try again later.